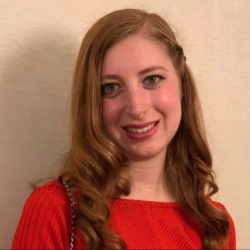 What if you were a 58-year-old man stuck in a 13-year-old’s body and you and your super-powered siblings had to stop the apocalypse, but you failed to do so in 2019, so you had to go back in time to the ‘60s and now, again, had to figure out how to prevent doomsday?

That’s the situation that Number Five Hargreeves, played by Aidan Gallagher, is in when Season 2 of The Umbrella Academy begins, and it’s part of what makes him the most interesting character on the show.

The Netflix series’ second season premiered on July 31, and I spoke with Gallagher about what it’s like playing a time assassin who really just wants to save his family.

“In the beginning of Season 1, Five is very stubborn and non-inclusive with the rest of his family,” Gallagher tells me. “He feels that he needs to do everything himself, and that his siblings are helpless in the face of an impending doomsday. From his point of view, they’re all like little kids to him.”

Gallagher himself is technically a kid, but at 16, but he’s as eloquent and serious about the work as someone three times his age. A youthful energy and an excitement does shine through, however, when we discuss the various aspects of his role on the show.

“Towards the end of Season 1, you see him finally open up with his siblings and realize that yes, he needs their help to stop the end of the world, and he really becomes more of a team player in those later episodes.”

In Season 2, Five has learned from his experience in Season 1 and is better equipped now to face the challenge of preventing doomsday. Gallagher says it’s because Five has learned how to ask for and accept assistance.

Gallagher says “it’s fun to see a continuation” of Five being humble enough to ask for help. It’s this “exploration of his vulnerability, of his humanity,” he says, that “I think we’re going to see more of.”

This kind of emotional exploration is something that Selene Gaia Walker, an admin of The Umbrella Academy Facebook group with close to 10,000 followers, was looking for in Season 2.

About Five, she says that she “dislikes his holier than thou attitude,” but says, “what’s interesting about him is the fact that he’s got a genius IQ, yet he has this childlike emotional storm inside him.”

We sometimes see that “childlike emotional storm” when he threatens to kill various family members when he’s feeling frustrated, or when he rants about being stuck in an apocalypse for 45 years, rather than facing the problem at hand.

His immature outbursts makes him have to earn the respect of his siblings and teammates, because, as Gallagher sees it, even though Five is a genius and is technically the eldest sibling, he’s not the de facto leader of the group.

“It’s not that he’s the leader, it’s that he’s never slowed down,” says Gallagher. Five hasn’t spent any time in the ‘60s (he had to jump right into world-saving mode) but his siblings have been there for years and are all very reluctant to upend the lives they’ve built in 1960s’ Dallas. Because of that, Gallagher says he can understand why Five has a hard time getting them to commit and focus on, you know, saving the world.

“He’s kind of like an unstoppable force in his own way; he’s been moving ever since the time he was 13,” explains Gallagher about Five’s mindset and breakneck pace.

Obviously saving the world is important, but for sibling Allison (Emmy Raver-Lampman), the work she’s been doing in the civil rights movement is just as urgent, as is her relationship with her new husband Raymond (The Originals’ Yusuf Gatewood). Vanya (Juno’s Ellen Page), meanwhile, can’t conceive of leaving without her new friend and lover, Sissy (Marin Ireland), and Sissy’s son Harlan (Justin Paul Kelly), who have become like family to Vanya.

Since he's not seen as the natural-born leader of the group, wrangling his siblings can be frustrating, but luckily, Gallagher manages to play off Five’s constant grumbling with a comedic twist. It’s a true credit to Gallagher who can pull off being convincingly funny, convincingly 58, all while acting and looking convincingly 13. Being a grumpy old young man has never been so amusing.

“He can definitely be very sarcastic and cunning at times,” Gallagher says with a chuckle, and points to his scenes with new character Lila Pitts (played by Ritu Arya) as an example. “The two of them are so poised, and [Five’s] very reserved, and she is very playful, and they're both sort of like these sharks who are constantly circling each other with their eye on each other,” he says.

While Five only tolerates Lila for as long as he does for Diego’s (David Castañeda) sake, he’s always suspicious of her, and you can see it all come to a head when Five and Lila finally have a showdown in Episode 5.

“So yeah, he can be uh, there can be some comedic moments, but it's always very tightly wrapped up in a good amount of tension and possible murderous intent,” says Gallagher.

Another cast member that Gallagher particularly likes sharing scenes with is Page. In those scenes, Five actually gets the chance to slow down.

“A lot of times Five is making these big gestures trying to get his family together and put out fires across the timeline in 1960s Dallas, and to get those scenes with Vanya … he needs to be very subtle because, you know, Vanya’s had a very troubling upbringing,” says Gallagher.

Five has to be delicate and gentle with Vanya, something that the time-traveling old man tween doesn’t usually bother to do. This is especially true this season because of her amnesia.

One particularly lovely Five and Vanya scene in Season 2 is in Episode 3. They’re in a diner, and Five tells Vanya all about their family and the apocalypse, but he’s careful to leave out that it was Vanya who caused it. It’s an unusually quiet scene for The Umbrella Academy, and one of the few times where we see Five drop his sarcastic, arrogant armor, and reveal his kindness.

“That side of Five is always a joy to play because we don’t see it a lot,” he says.

While Gallagher particularly enjoys playing scenes with Arya and Page, he says that he’s always happy whenever Five gets to share a scene with another character. Any character.

Since so many of the characters are very much in their “own little words and arcs as we progress through the season,” he says it feels “incredible” when they share the screen together.

“I would say anytime you get to a scene where the full cast, the full family, is involved, it's exceedingly enjoyable to watch the actors as every character go back and forth, to see that dynamic evolve,” he says.

One of those full cast member scenes is when the family reunites with a younger version of their father, Sir Reginald Hargreeves (Colm Feore), to ask him for help with how to get back to the future and avoid another apocalypse (or in Diego’s case, to accuse him of planning to kill JFK).

Natalie Langbridge, an admin at another Facebook fan group with over 50,000 members, also titled The Umbrella Academy, thinks this scene is pivotal. “Five and the rest of the siblings teach Reginald about the future and the powers they have and how what he did made things worse,” says Langbridge. Each sibling has gone through so much trauma, she says, because of their father. It’s unclear, though, whether their father learned the right lesson from this encounter.

For Five, however, coming to terms with his father is something he’s finally ready to do, says Gallagher, and he gets the chance when they sit down at the tiki bar after the rest of the family leave the meeting.

“In Season 1, his only real relationship with Hargreeves is the resentment and turmoil that was left over from when he was 13. I mean, think about it,” says Gallagher. “He’s been stuck in an apocalypse with Hargreeves’, sort of, snide ‘I told you so’ eating away at Five.” By the time Season 2 rolls around, Five’s relationship with, and toward, his father has shifted, and he’s looking to him for help.

While Five is disappointed that his father doesn’t have all the answers, Hargreeves does give him very sage advice about time travelling seconds rather than decades, which pays off majorly in the finale. More importantly though, Five apologizes for giving his father such a hard time when he was a child, and Hargreeves accepts.

When father and son sit down for that glass of scotch, Five is “feeling very vulnerable, and very guilty, and Hargreeves is kind enough to give him that forgiveness. And that resolves a lot of emotional buildup that Five had within him that he always just suppressed and pushed down instead of actually dealing with it,” Gallagher says.

Gallagher describes this moment between Hargreeves and Five as “a step in the right direction for Five, because oftentimes he can hide behind his trauma and use that to get out of actually facing who he is.”

He adds Feore to his list of actors he enjoys playing against: “Subtle scenes with Ellen or Hargreeves in that manner are fun as an actor because I get to explore who Five is as a person and we’ve never really seen that,” Gallagher says.

Don’t get him wrong, though. The fight scenes are almost as fun as the quiet, emotional ones. “I always enjoy getting to let loose with Five in a physical way … Anytime I get to be the Five from the comic book, where he's just creating this bloodbath behind him, it's always a joy to bring justice to the creation in that way.”

Gallagher, after all, is a huge fan of the comic books. The Umbrella Academy: Apocalypse Suite was released in 2007 and is the first in the series written by Gerard Way and illustrated by Gabriel Bá. (The fourth in the series is rumored to drop September, 2020.)

“I always enjoy watching the live action version of Umbrella Academy come to fruition because you get to read the comic book version as a fan first, and then it's not like you're watching the same story repeat,” he says. To which Gallagher credits the storytellers.

“It’s a complex thing, but that’s sort of the brilliance of the fine line that the writers — Steve [Blackman] and Gerard and Gabriel —they really work with each other to resemble the two worlds that they create, but also keep their distance so that as fans, we get to happily move from one universe to another.”

The fourth comic book is also the first spin-off in the series; titled You Look Like Death: Tales From The Umbrella Academy, it follows Seance’s journey to, where else, Hollywood.

As for what Season 3 of the Umbrella Academy universe will look like on Netflix, that’s still TBD. The show hasn’t been renewed yet, but considering its one of the platform’s most popular titles, it’d be as surprising as Five losing a fight if it didn’t get a third season.

If Five keeps making progress with his emotional maturity and finally gets past all of the crises that keep coming his way, maybe, just maybe, he’ll be able to live a normal life as an old man trapped in a teenager’s body with superpowers. That’s pretty much as normal as The Umbrella Academy gets.