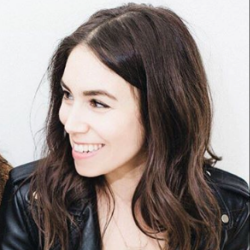 Sure, Jennifer Aniston might be the most visible style star to come out of 10 seasons of Friends — what with her high-waist straight-leg jeans, her mens-inspired buttons downs, and you know, The Rachel — but look carefully and you’ll see that Phoebe Buffay is the most stylish character on the show.

Hear me — and former Friends’ lead hairstylist Richard Marin — out.

Marin worked on the show from 1996-2003 and went to set on Thursdays to trim Matthew Perry, David Schwimmer, and Matt LeBlanc's hair, and on Fridays — shoot days — he'd spend a "fast five hours" from noon to 5 p.m. getting Aniston, Lisa Kudrow, and Courteney Cox camera-ready.

While Aniston's hairstyle as Rachel Green went viral before viral was even a thing —"I used to get mail, as in, letters, [asking] why I changed Rachel’s part," Marin says — Phoebe's look was just as important to the zeitgeist.

"Phoebe was a very specific look. She always had to have a hippie vibe!" Marin says. And that specific vibe was a team effort. Costume Designer Debra McGuire would send Marin Polaroids ("it was the '90s," Marin reminds me) so that he could design hair that matched Phoebe's look.

Those curly tendrils, though.

Kudrow had a say, too, in Phoebe's appearance. "I always ran it by Lisa for notes, but she was always accommodating with what I felt was the look for Phoebe," he says.

Marin had to take Kudrow's real life, not just Phoebe's wardrobe, into account when thinking about the character's hair, as well. "Phoebe's hair changed looks as Lisa’s life developed," he says.

When he joined in Season 3, he gladly adapted Kudrow's long, layered hair from her time shooting Romy and Michele's High School Reunion into Phoebe's new look. It was out with Phoebe's bangs and in with blonder, longer locks, all thanks to Kudrow's time on the movie set and Marin's vision for a softer Pheebs.

And when Marin cut Kudrow's hair shoulder-length for Analyze This, he had to use hair extensions to keep continuity with Phoebe's look on Friends. "I felt Hippy Phoebe would never have short hair," he says.

Plus, just imagine Phoebe with short hair: what would have happened to all the butterfly clips?

“At the time, in 1998, everyone was wearing barrettes, hair claw clamps, jeweled headbands. I guess I was just influenced by the current trends," Marin tells me. But, truth be told, he has a little PTSD when he tunes in and sees all those hair accessories.

Butterfly, butterfly, what are they feeding you?

“I still have a love/hate response when I see rerun episodes,” he says. “I went a bit hair-accessories-overload for a minute.”

But, as Phoebe’s character evolved, so did her hair, makeup, and fashion. McGuire would eventually leave behind Phoebe's over-the-top layering for a more streamlined (but still eccentric) look, and her hair followed suit.

“I always loved Phoebe with simple, center parted, bone-straight hair,” Marin says. “It was her hippy essence, but as Phoebe got more polished, so did her hair." In the later years, Marin was still "using a lot of jeweled hair accessories, but fewer curls or braids.”

"The Rachel" may have held most of the hair spotlight, but all the women of Friends had proprietary style definition. "There was never competition between hairstyles between the girls," Marin says. "Rachel, Monica, and Phoebe had there own looks and I always took the characters' look into consideration."

And you have to hand it to Phoebe, via Marin. After all, hair accessories are back. The Rachel? Not so much.