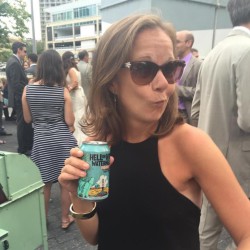 When it comes to the new girl role, Leah McSweeney and her spectacular hats and hurricanes might have been enough to satisfy any Real Housewives of New York fan, but the fact that she also brought along Martin Snow, the boxing trainer she’s worked with for 11 years at Trinity Boxing in Tribeca, Manhattan, really adds that extra something.

Martin and Leah (I learned he calls her “McSweeney” when the three of us spoke on a conference call) are close friends in real life and it’s Leah, not Tinsley “Tinsdale” Mortimer, who we have to thank for Martin’s appearances on RHONY.

“I'm so happy that Martin is a part of the show with me,” Leah tells me — and Martin — over the phone. “He’s such a big part of who I am and my daily life.” Leah, who used to go to Trinity several times a week before Coronavirus-related shutdowns, lives close to the downtown gym and would never move away from it; the robust “community that Martin built” through the gym that his great-grandfather founded a 100 years ago is a big reason she’ll never leave the neighborhood. (For what it’s worth, Martin’s great-grandmother was a vaudeville star, which makes a lot of sense.)

In the Season 12 premiere, viewers meet Leah for the very first time in Trinity Boxing. It just so happens that it was also her first time filming for the show ever, and it helped that she was in her “second home,” she says. It made her feel more comfortable and relaxed as she started her daunting journey as a Real Housewife.

As for Martin, his road as a Real Housewife-adjacent-boxer-slash-life-coach-slash-perfect-reality-star also started at, no surprise, Trinity Boxing. He’d heard of the Real Housewives of New York before Leah came into his life — “He is a New Yorker!” Leah chimes in defiantly — but he hadn’t seen an episode before filming began.

“It wasn’t exactly on my watch list,” he tells me in his perfect New York City accent. “I don’t watch a lot of television, but even if I did, it’s not really up my alley.”

But now that he has more freetime given that gyms in the city are shut down, he is watching the show and he’s even doing weekly recaps on Instagram, in which he calls Dorinda Medley, “Dorito,” and Tinsley “Tinsdale.” “I’ll tell you what,” he says. “It’s really a good show.”

“I’m really learning a lot about life,” he says. “There's an existential layer to the Real Housewives of New York. They’re kind of like the Beatles, like, ‘which Beatle are you?’ Everyone sees themselves in one of them. When you watch, it’s like ‘which Housewife am I?’ and I think McSweeney has really carved out a niche.”

It turns out that Martin does watch some TV, though, as he begins to go off on a somewhat erratic tangent in order to make sure I understand the depth of their friendship dynamic.

“Here’s the best analogy that I can come up with,” he starts.

“McSweeney is like the Carrie Mathison of counterculture and I’m her Saul [Berenson],” Martin says, referencing Claire Danes’ and Mandy Patinkin’s Homeland characters; Leah laughs in the background. Martin starts to backtrack though, wondering aloud if maybe he’s more of "the other guy" to her Carrie, struggling to recall the name of the character. "I trained that guy, actually."

Leah and Martin go back and forth trying to remember "that guy's" character name in a way that reminded me of talking to both parents at the same time on a Sunday afternoon call. They finally realize they're talking about Rupert Friend's character, Peter Quinn, and Martin decides that he's definitely a Saul, after all.

It’s unclear if Martin’s analogy means he’s like a mentor to Leah or that, as the Carrie, Leah might one day betray Martin for her country … But Martin doesn’t hear me — or pretends not to — when I ask why he relates to Saul, so I let him riff more about Leah.

“She finds struggle and then she overcomes it, she’s a rabble rouser,” he quips. “This kid” — Leah is 37 — “is absolutely brilliant and heroic and a whole bunch of other things.”

“I learn from her… I learned about women and life, and kind of like [John] Lennon and [Paul] McCartney, we click. Whatever kind of response I get from [the show] is because I click with McSweeney,” he says.

He’s now on a roll. “When she fights, she fights for other people and she will take an unpopular stance and she does not give a fuck. Anyone can defend themselves, but she defends other people and that’s a rare commodity, to do it when you don’t have to.”

In Thursday night's episode, Leah shows this side of herself as she defends her sister (and her potential right to visit Newport, R.I.) against Ramona Singer. Leah floats like a butterfly and stings like a bitch at the dinner party on the lawn of Castle Inn, and I, for one, was very entertained. Leah's unapologetic approach to having "ten martinis" and letting loose to exorcise her demons is as watchable for the viewer as it is cathartic for Leah.

The resulting social media storm has been interesting to witness (Team Leah) — Ramona's hypocrisy for calling out bad behavior has been dragged onto the stage and shoved under a glaring, unforgiving spotlight. There's so much talk of Ramona shitting her pants! I digress.

All of this is to say that if Martin watched Thursday's episode titled "Hurricane Leah," he wouldn't be surprised by his prize fighter's gumption and determination. But back to the phone call:

Eventually, Leah cuts Martin's rambling off. “Martin, stop being crazy. First of all, you are who you are, it has nothing to do with me, so just stop. I’m just happy that you’re on the show. We’re so far up each others’ asses right now though, Karen” — that’s me — “must be like ‘shut the fuck up,’” she says, insisting that she’s learned just as much, if not more, from him.

Emma Diamond and Isabel Greenberg, two of the three women (co-founder Julie Kramer isn’t much of a Bravo fan, they explain) behind the incredibly popular Instagram fan account Comments By Bravo, think that Martin is a delightful addition to RHONY, going as far to suggest that he might be one of the best side characters in Housewives history.

Greenberg says, “I think to stand out on RHONY for being funny when you’ve seen the cast literally run around the backyard naked is so hard. But I thought he was just hysterical and definitely in the top tier of the appearances we’ve had on New York, probably over anybody.”

She’s right. Recent New York side-characters have included the likes of Dorinda’s ex John Mahdessian (thanks but no thanks); Barbara “The Snoozefest” Kavovit (did you even remember she was on just last season?), and quiet and sneaky Elyse Slaine this season, all of whom barely, if at all, warrant a seat on a reunion couch. Carole Radziwell’s then-boyfriend Adam Kenworth Amid in Season 9 was a watchable, handsome young man who wandered around grocery stores with her, but he didn’t really bring any GIF-worthy moments, which might be the most reliable way to assess a true and worthy “friend of the cast.” Martin was built for the GIF. (Somebody make a GIF out of him, already!)

Greenberg adds that while there are often trainers, glam people, or others, like Bethenny Frankel’s driver, who are in the Housewives’ lives regularly, they don’t always have the same flair as Martin does. She cites Mikey Minden, Erika Jayne’s choreographer on Real Housewives of Beverly Hills, as an example of another sub-character who’s “actually interesting.” There’s also Real Housewives of New Jersey star Danielle Staub’s problematic friend Danny Provenzano who, Diamond says, “had this tough guy vibe but was very down to talk about the drama,” making him a theatrical addition.

Greenberg also likened Martin to the late, great Mama Elsa from Real Housewives of Miami. “I love when these people come in with a third party perspective on the situation,” she says. “[Martin] was able to look at [Tinsley], like when she’s upset about taking her hoop earrings off, and kinda brings her back to reality,” she says.

In case you missed it, “Aaaaaaand, nobody gives a fuck,” was his retort to Tinsley. Martin offers words of wisdom “in his own language,” as Greenberg puts it, and what a language it is.

Take this quote that could be printed on an inspirational Pottery Barn wall hanging: "Right now, you live a life of doubt. And what's the antidote to doubt? Faith.” Or how about this for an Instagram caption? "You know what you want, you know what you like. You know, nobody else. Do whatever the fuck you want to do." (Leah definitely took this advice in Newport.)

Or how about his epic response to Tinsley trying to get out of physically boxing by insisting she didn’t want to hurt him. “Well, I’m gonna hit you and I’m not gonna feel bad about it,” he said on the show. Twice, no less.

This is exactly why Leah thought he would be just what RHONY needed this season. “I mean, I go multiple times a week so I’m not crying every time.” She knew that if the audience got to see Martin in his element, making people get out their blood, sweat, and, most often, tears, he’d be a hit on the show.